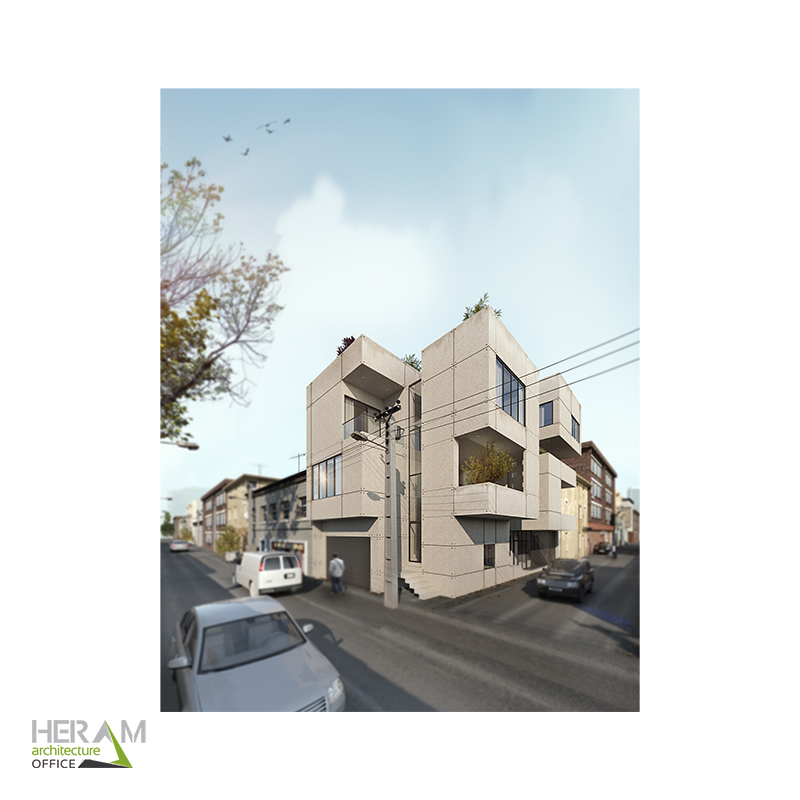 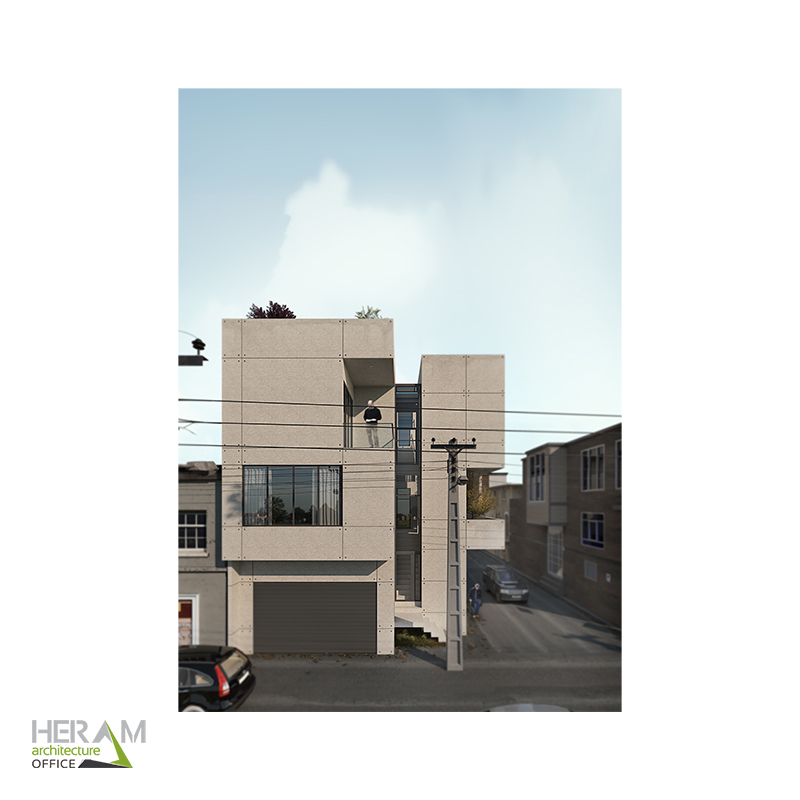 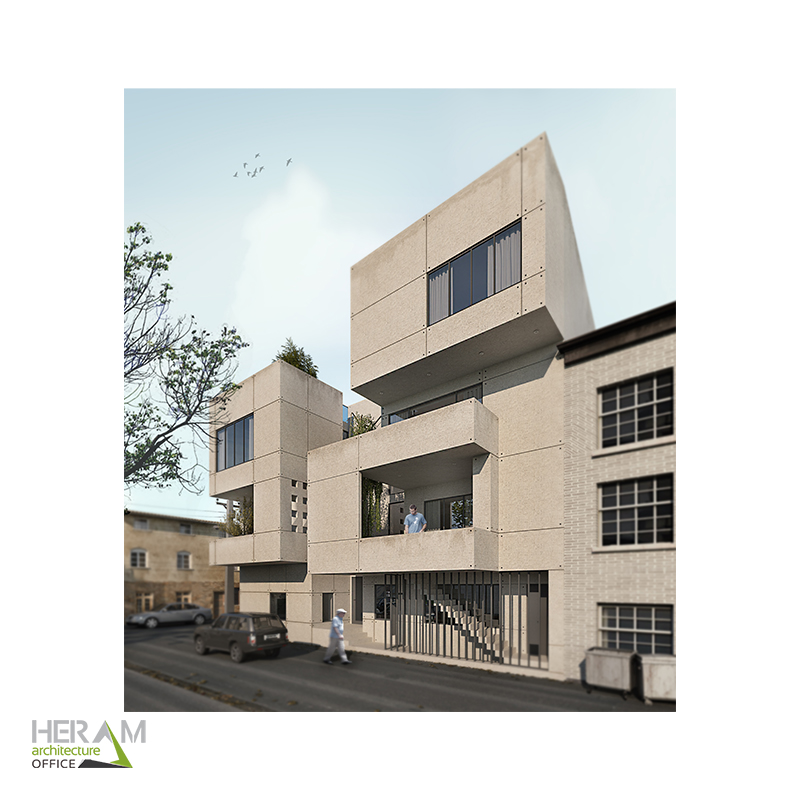 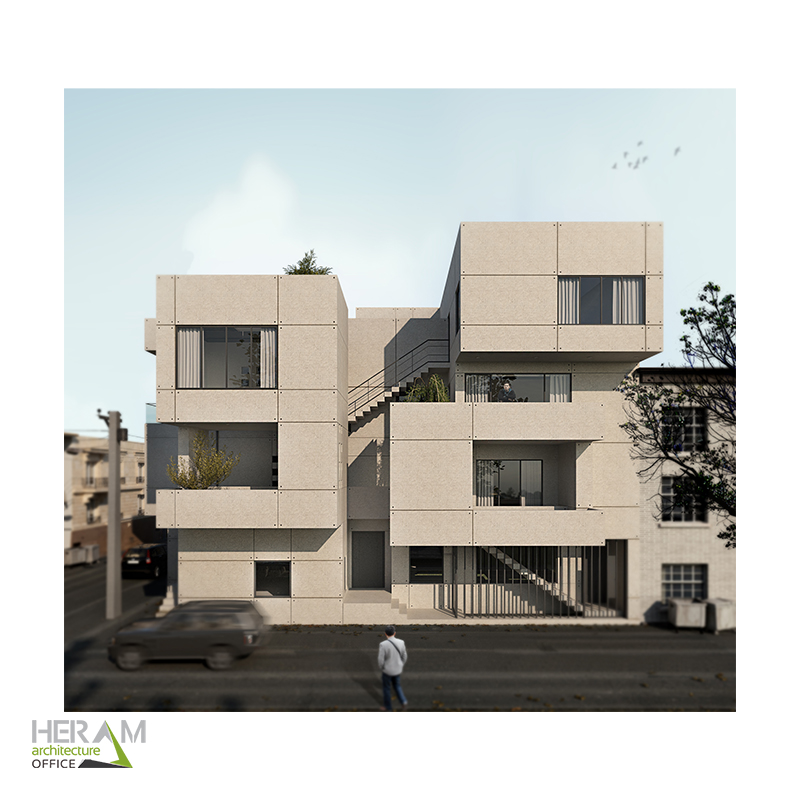 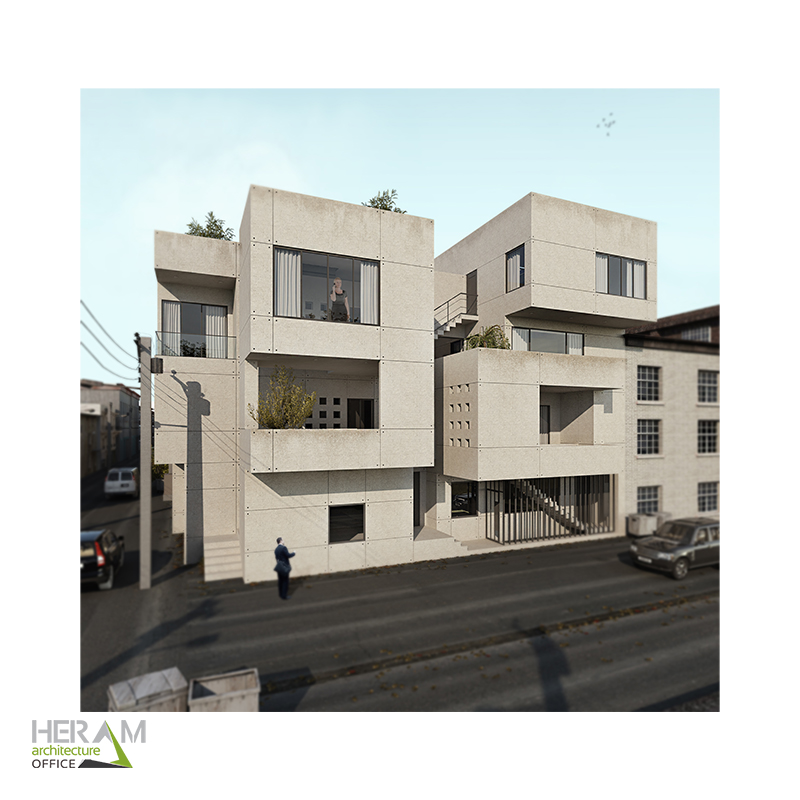 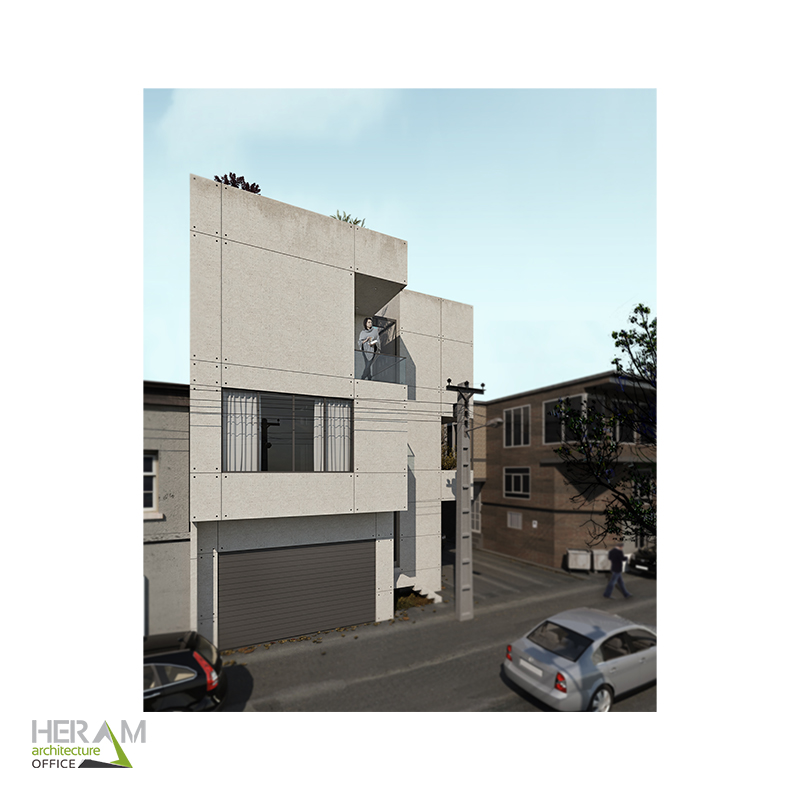 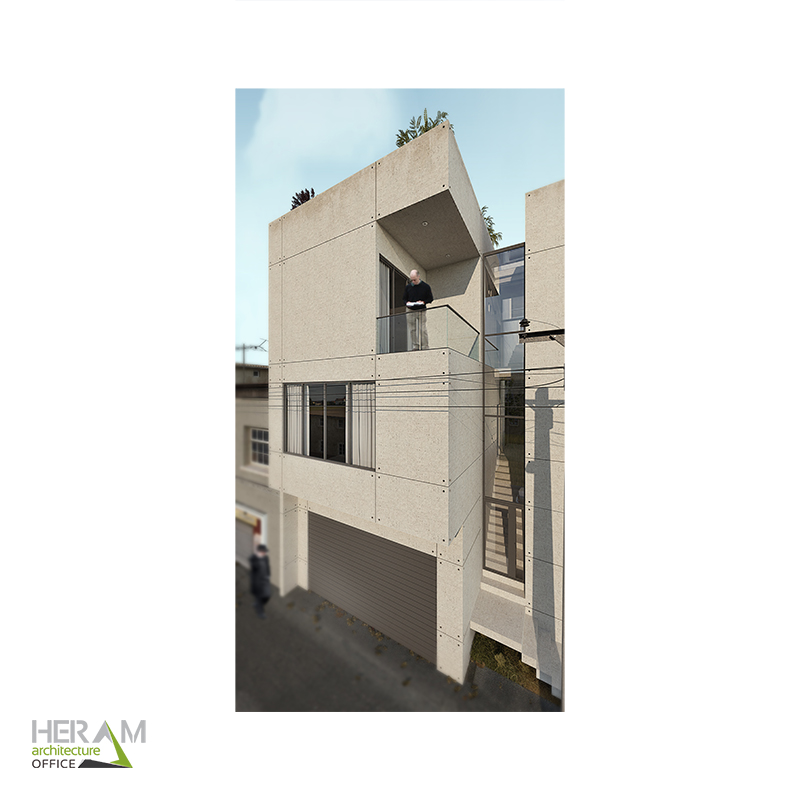 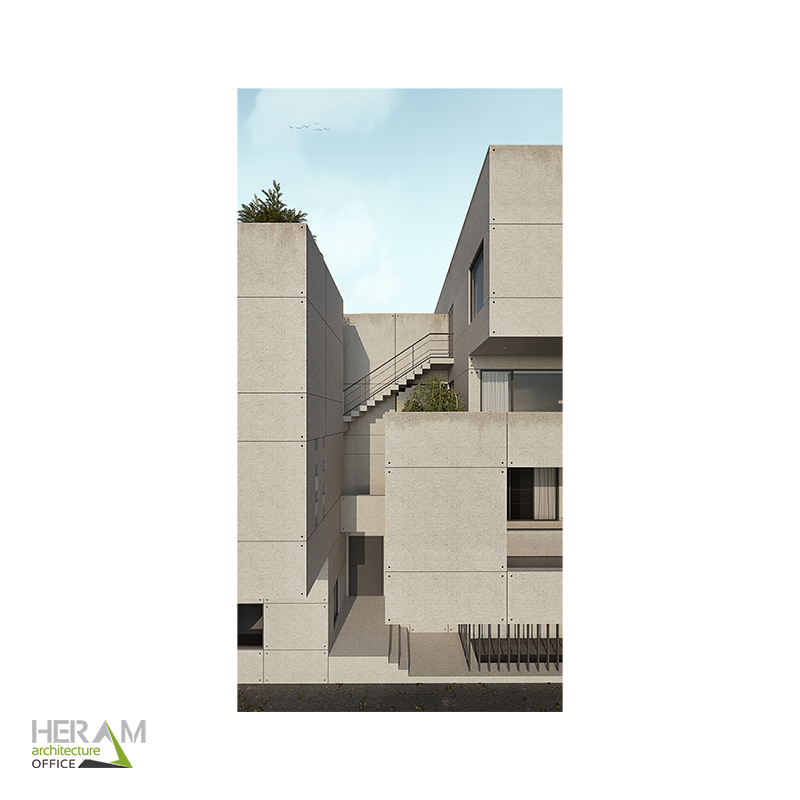 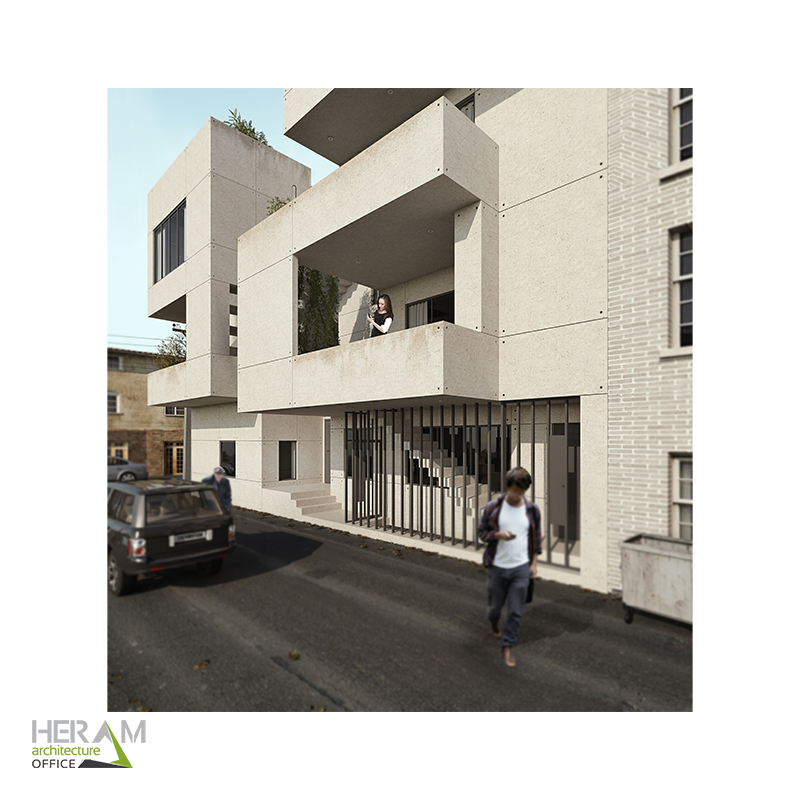 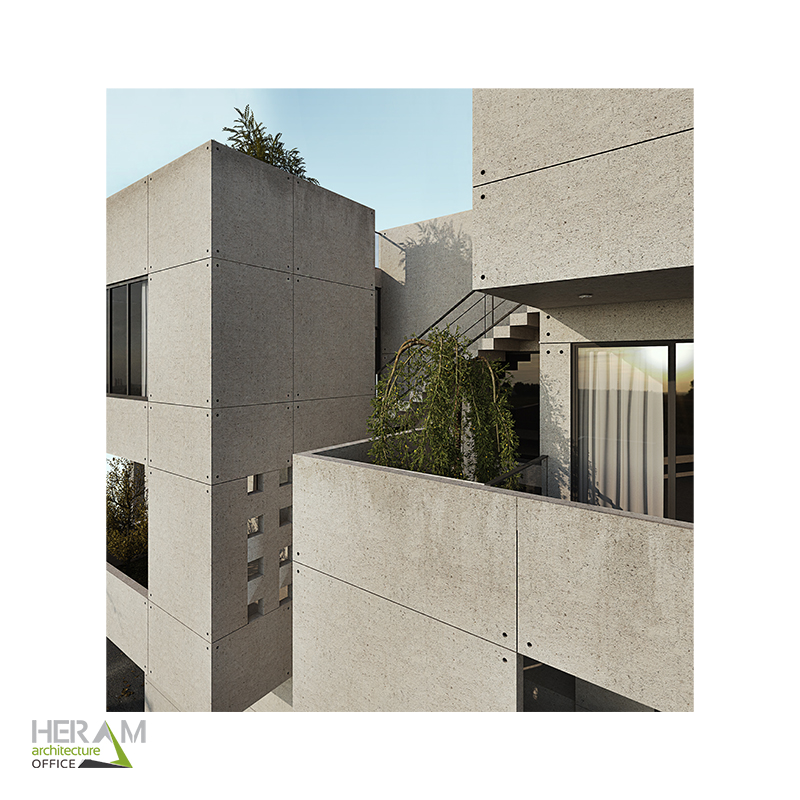 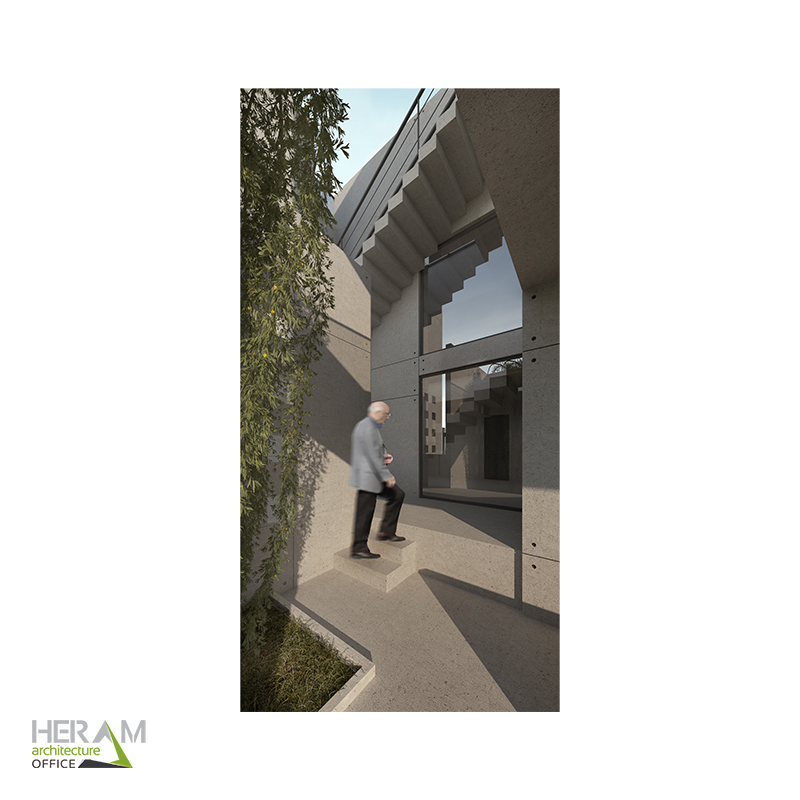 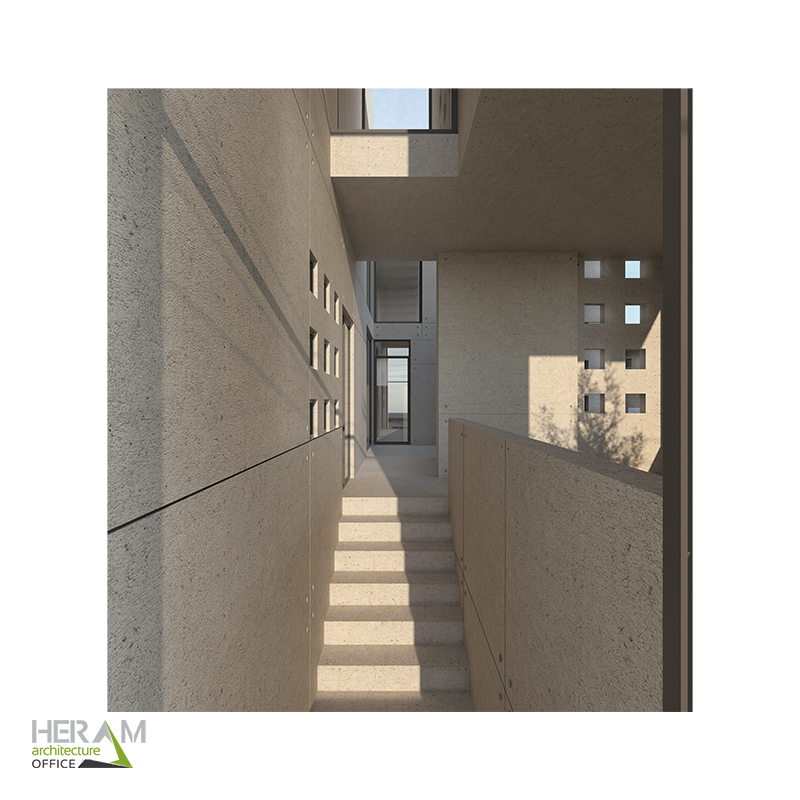 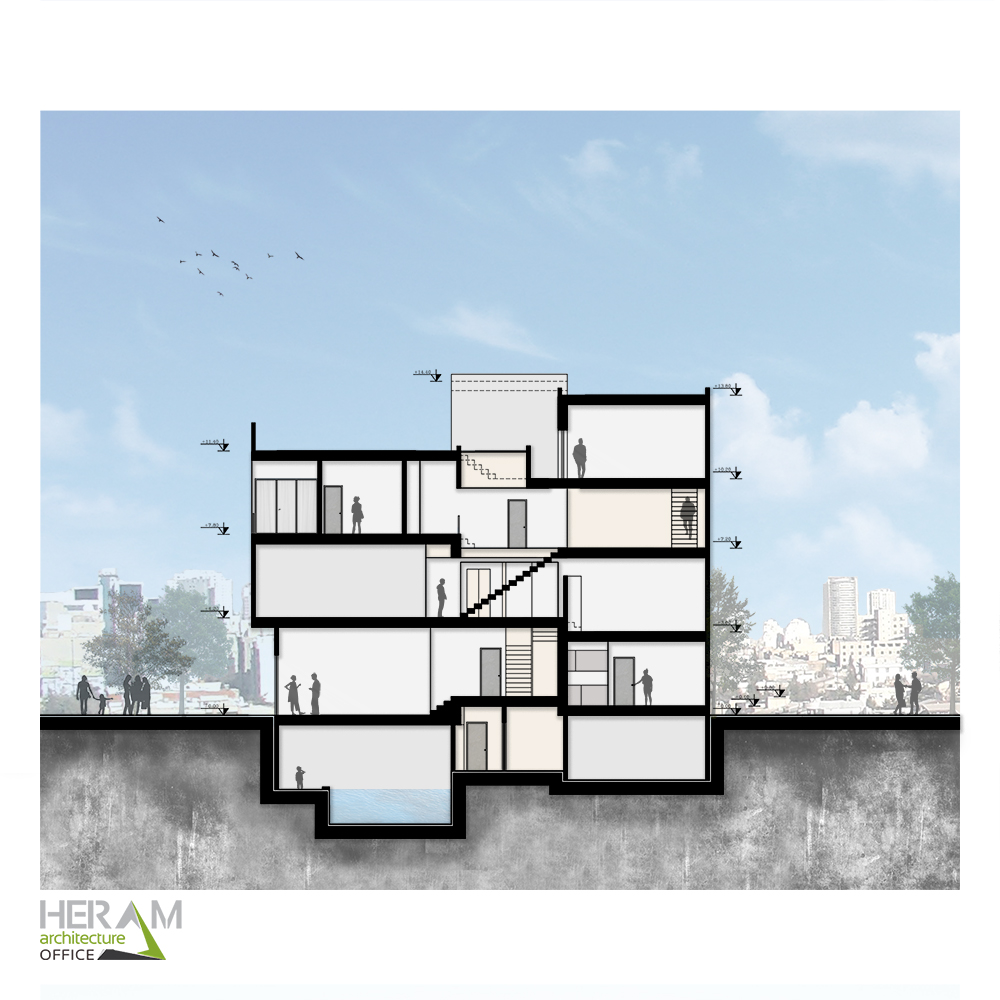 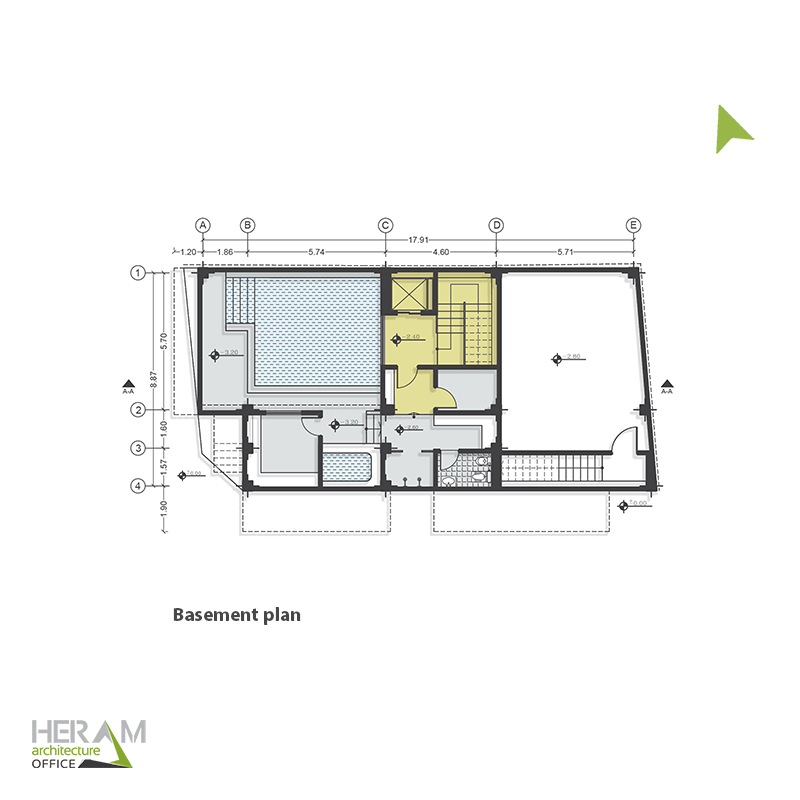 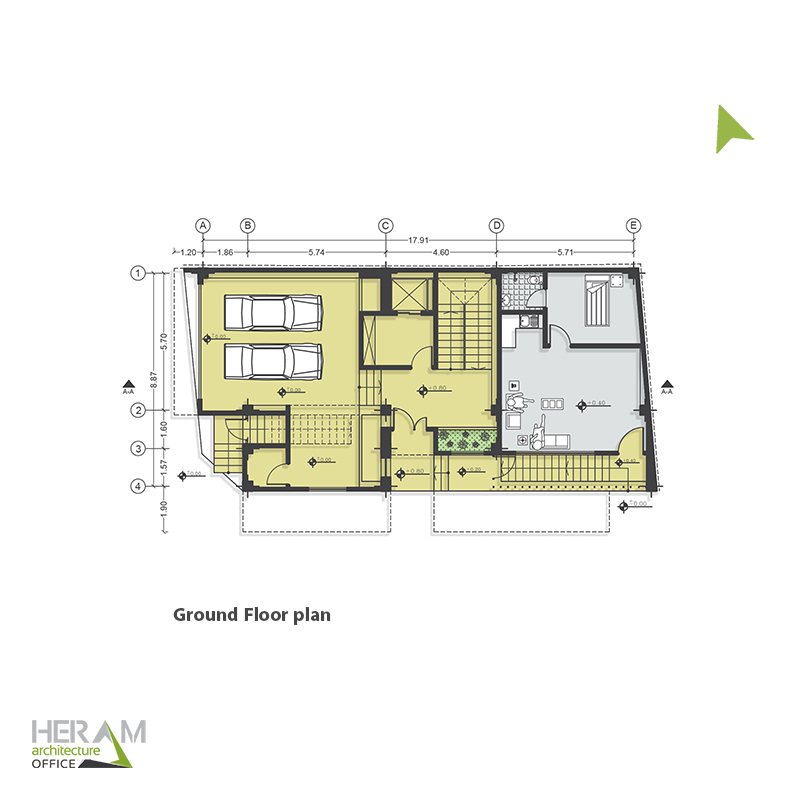 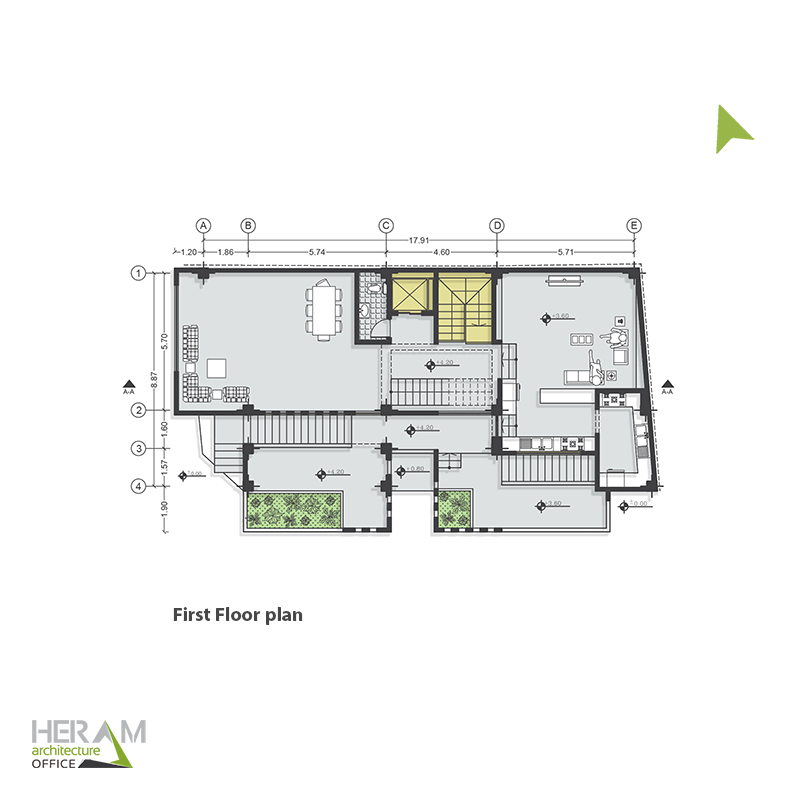 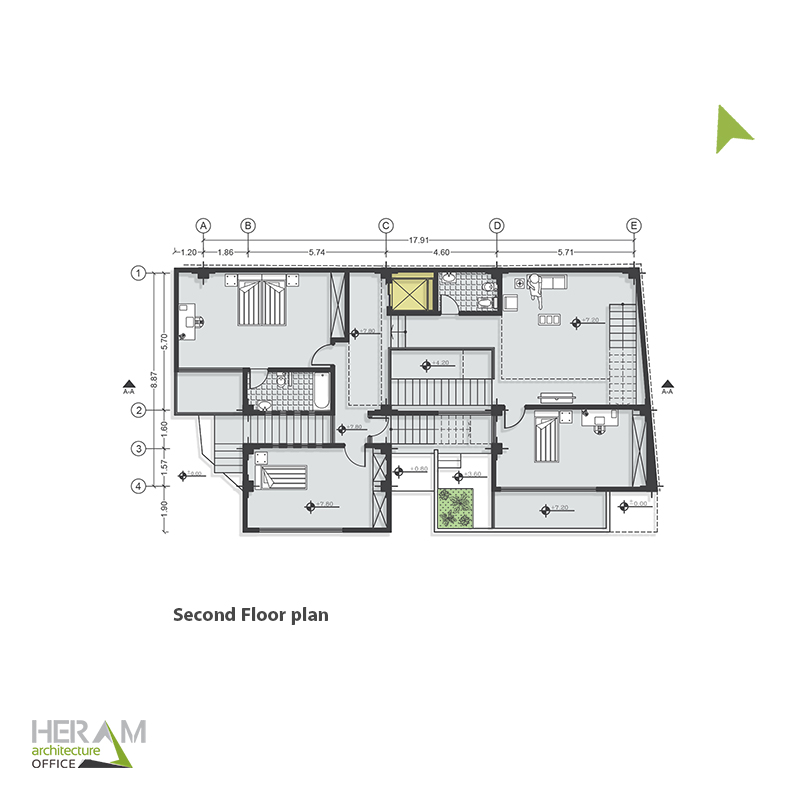 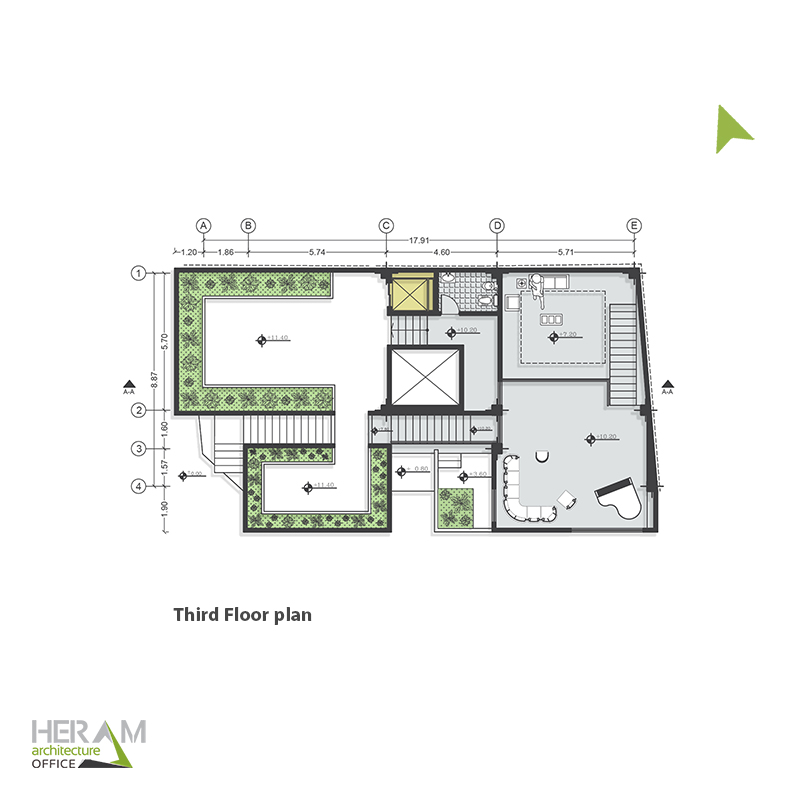 The unique features of traditional homes in Iran have been shaped by climate, privacy and lighting. These houses were designed to provide maximum comfort to their users. These houses have deep connections with nature, region climate, and sky.

Buildings that are located in urban context are subject to city rules and regulations and predefined criteria. These buildings should be built according to neighborhoods, projection criteria, land and surrounding areas.

In Iran, the creation of a home located in a compact urban context and coordinated with urban standards is one of the major challenges in designing residential projects. A house that is compatible with fine grained urban context and on the other hand, has the spatial qualities of the house and can accommodate the concept of residence.

The staircase is typically constructed as one of the most important three - dimensional space forming elements to respond to a particular requirement, and has long been highly influential in architecture and formation of projects framework. For example, at the house number six Eisenman, the staircase is the opposite of the rare appearance of this house. The element that embodies the axes of this house and is painted to draw attention to the color of red. In ancient architecture of Iran, spiral staircases and staircase that are built on the roofs and interior and exterior spaces and the slopes of the water reservoirs are of particular importance. The connection between the floors and the way to access the roof is also through the staircases. The presence of a staircase in a building like the Taybad building of Khorasan has also made it possible to lighten the volume of the building. Therefore, staircases are an element of function, the most important of which is the access of floors to each other, which is formed as a fluid physical in the project. Regardless of the main function of this element, it is necessary to reconsider the nature of the staircase in the architecture. The challenge we were looking for in the project is a new definition of the staircase in addition to its functional nature. The element with changing spatial coordinates and expression in the first stage determines the process of forming the exterior volume of the project, the independence and formation of other functional spaces, and at the next stage an interactive space for pausing, watching, sitting, meeting, and dialogue within the project.

The project is located in Kurdistan Province and in the city of baneh. Climate of region is a mountainous and has a beautiful nature. Also, the project's location in urban fine-grained context is such that in its neighborhoods buildings are destroyed and sometimes can be visually inappropriately. This causes the project to be in the first layer from a suitable perspective, for example, in front of the project, a two - storey building that has been left unfinished, and the outer walls of the building are covered with pressed bricks, In the next layer, the back of this building is visible from the mountains and the surrounding nature. thus, another challenge posed in the project was to conceal the first layer from the structure of the project and the visual effects of the project and in the second stage of establishing dialogue and forming a suitable aspect by the project view for its neighbors.

First, according to the positioning of the land in the urban context and the physical program developed by the employer who requested house in three floors, the project was conceived as a coordinating box with the surrounding context to avoid inappropriate view of the building facing the project, the outer wall was considered as an intermediate volume with the original space. This interface was seen as a courtyard on the first floor and as a result, two sections of the volume. The street volume was covered on the first floor with green area to interfere with the inappropriate view of the building. This effect went so far as to deepen the project interface and make the plan and volume of the project go back and forth in dialogue and communication, and in addition to responding to the visualization of the project, the issue of the privacy and spatial organization of the project is also solved. On the other hand, the staircase which was considered as a challenge to design was revealed as a 3 - dimensional volume element in the building facade as well as within the project. The staircases were located in different parts of the project, which facilitated fluid and continuous access to the floors, and when they enclosed the project, they questioned the definitive boundary between the inside and the outside of the project and served as intermediaries for communication inside and outside the building. Also, elemental staircases It was to pausing, interacting, sitting and chatting in different parts of the project.

At the end of the project, with the influence of the context and foundation of ancient homes of Iran, the area and city context and attention given to the staircase element were carried out so that it could be a home between text for Iranian and question the classical definition of the boundary for the inside and outside the project and to make a logical connection to the surrounding environment. Finally, the Artapose concrete material was chosen for the project to maintain the purity of the project in a dialog between tradition & modernity.

In the spatial organization of the project, fluidity and creation of the empty space were considered. so that the floors can be visually and spatially related to each other and cause the general spatial continuity of the project. Access to the first and second staircase, which is empty to the roof and enters the ceiling of that light, is an example of this space. thus, by placing spaces together and creating an empty space, the fluidity is formed and the project is in deep connection interior and exterior, so that the boundary between interior and exterior is not built and the spaces are in full cohesion with each other. in this spatial organization, functions were formed in such a way that each of the spaces had their independence, and the boundary between spaces can be separated by changing the coordinates and the differences of the surface. Diversity and preservation of the invisible boundary of each function, in each floor, led to the user in addition to the environmental comfort of discovery and experience of different spaces with different spatial qualities.